Though we know it as a fun novelty toy, the Magic 8 Ball got its start as an authentic spiritualist tool.
Albert C. Carter grew up as the son of a Cincinnati psychic consultant who favored the use of spirit slates in her readings.
The client would ask a question, and the answer would mysteriously appear written on a slate.
The use of the slate required some skill and knowledge of magic sleights.
In 1944, Albert invented a tool that could be marketed to "psychics" who had no magical skill.
He called his invention the SYCO-SEER.
It was actually a sealed glass jar, filled with a thick dark liquid.
Floating in the liquid was a small die with a word printed on each of the sides.
The tube was covered in thick cardboard so that the only way you could see the die was through the bottom of the tube.
The thickness of the liquid caused the die to be slowly revealed, making it seem very mysterious.
Albert partnered with his brother-in-law, Abe Bookman, to form Alabe Crafts, Inc. in an attempt to market the SYCO-SEER as a "Miracle Home Fortune Teller".
Sales were dismal, and Albert passed away shortly after forming the partnership.
Abe tried to relaunch the product several times, making small changes to the design, again with very little success.
In 1948, on a whim, Abe put the glass jar inside a heavy plastic ball, hoping that the shape would make customers associate it more with a crystal ball.
That design did not take off either- until the Brunswick Billiards Company approached Abe to use the design as a BILLIARD ball rather than a CRYSTAL ball.
The special order from the Brunswick Billiards Company had the "8" printed on a black ball- just like a billiards 8-ball.
The novelty was given out as a promotion by the company and it was a big hit.
Abe realized that consumers liked the ball when it was presented to them as a fun toy rather than as a serious psychic device.
And the rest is history!
Today, the Magic 8-Ball patent is owned by Mattel, who claims to sell a million Magic 8 Balls every year.

Here are some examples of early 8-Balls from my collection... 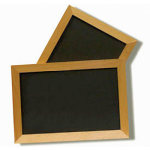