Posted by Peter Monticup on 4/18/2022 to Guest Performers


MURRAY SAWCHUK'S MILK PITCHER
Our customer and friend, master magician and TV star Murray Sawchuk, puts a clever spin on the classic Milk Pitcher routine.
His high energy sets the tone for his trademark upbeat delivery.
But it's his attention to detail is what is really impressive.
Watch how he spills just a bit of milk "by accident".
That's the "convincer"- the seemingly innocent action that really sells the trick to the audience.
With that little spill, the audience KNOWS that the pitcher is really filled with milk.
Genius!

Murray, who is currently headlining at The Tropicana Resort & Casino on the Las Vegas strip nightly, exploded onto the entertainment scene as a semi-finalist on NBC-TV’s “America’s Got Talent.”
He is also a YouTube sensation, with over 1 Billion online views.
He is a regular guest star on History Channel’s “Pawn Stars” as a Magic Expert.
He has also been featured on over 20 Reality shows from America’s Got Talent, Pawn Stars, CW’s Masters of Illusion, SYFY’s Wizard Wars, VH1’s Celebracadabra, TLC’s 4 Houses and What Not to Wear, Reelz Extreme Escapes, PopTV’s Don’t Blink, Master Chef, Top Gear, Hallmark’s Home & Family, Nat Geo’s Brain Games, and more. 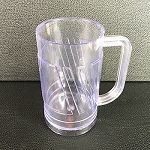