My favorite way to open my show is to make my entrance from the BACK of the theater.
The emcee announces me, and the audience turns its attention to the center of the stage.
But suddenly- and LOUDLY- my siren whistle sounds behind them, and they now turn to see me sweep past them, up close and personal!
It's a big surprise, it gets everyone's adrenaline pumping, it lets people know that excitement is about to happen- and it gives me an instant connection with them even before I reach the stage.

In this clip, you'll get to see the final seconds of my trip to the stage for the opening of the HOUDINI NOW show several years ago.
This show also featured Sideshow Steve, who does some of the MagicTricks.com demo videos with me.
Also in the show was Alexanderia the Great, the female escape artist who made it to the semifinals of America's Got Talent.
Also on stage was Manda-Lynn and her parasol manipulation act, as well as celebrity impersonator Mark Cline as Barney Fife.
The live music and musical effects were performed by my musical director, Nick Berkin.
It is a real treat whenever I can have live music for the show.

In weeks to come, I'll share some more segments of the HOUDINI NOW show with you.
For now, enjoy the opener- and get yourself a siren whistle! 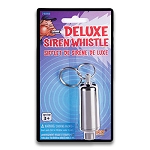