Posted by Peter Monticup on 8/12/2020 to Guest Performers


BOB CARROLL
Bob always creates clever routines for his magic, especially classics like this Svengali Deck.
Bob and I have been friends for over 50 years.
We're both from upstate New York, and in the 1970s, we owned a magic shop together in Albany, New York called MCM Magic.
We also performed our acts at various nightclubs in the area- and boy, do we have stories to tell!

Bob is not only a talented magician, he is an accomplished comedian and ventriloquist.
I even own an early puppet used by Bob, named Admiral Bird.
In 1979, Bob told jokes in a club for 24 hours straight to win a spot in the Guinness Book of World Records!

Since early March, Bob has been entertaining his Facebook followers with a daily Trivia Show.
If you are looking for some fun daily entertainment- join his page! 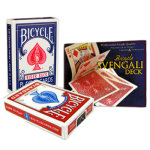