The World's Most Dangerous Magic Trick

No, it isn't the Water Torture Cell or the Buried Alive illusion, or even the Straitjacket Escape. The effect known as the Bullet Catch has claimed the lives of at least 15 magicians who were killed in connection with this potentially lethal trick.

In the effect, a bullet is fired directly at the performer, and he (or she) catches the bullet in the teeth, hopefully without any ill effects. There are a number of ways to perform this trick, and those that perform it are definitely inviting disaster. Sometimes things go wrong- equipment fails or worse.

The most famous bullet-catching death was that of Chung Ling Soo (William Robinson), shot on stage in 1918. Rumors persisted that his death was not an accident caused by equipment malfunction, but was a murder motivated by jealousy.

So shocking was the death of Chung Ling Soo that magician Harry Kellar famously pleaded with Harry Houdini not to perform the Bullet Catch. In a letter to Houdini, Kellar wrote: Don't try the bullet-catching trick. There is always the biggest kind of risk that some dog will *job* you. And we can't afford to lose Houdini. Harry, listen to your friend Kellar, who loves you as his own son, and don't do it! Houdini listened to his friend, and never attempted to perform the trick.

No doubt a show-stopping trick, the Bullet Catch has been performed by a number of brave magicians, and can still be seen on the programs of current magical artists like Penn and Teller. Magicians successfully performing the trick have included Philip Astley (also credited with creating the first circus as we know it today), John Henry Anderson, Robert-Houdin, Alexander Herrmann, Adelaide Herrmann, Ted Annemann, Rooklyn, Jean Hugard, Milbourne Christopher, Paul Fogel, Dorothy Dietrich and Paul Daniels.

Other magicians have not been so lucky. Below is a list of the unfortunate magicians and their assistants who met an untimely end performing this most dangerous and deadly trick. 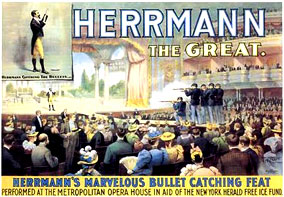 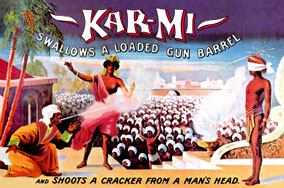